I Have No Friends

Amanda, 13 1/2, is not one of the "in" kids whom everyone wants to sit next to. "What's wrong with me," she's wondering, "and how will I deal with the anxiety of the first day?" 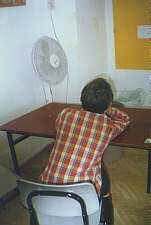 I always hate the first day of school. Not the shopping part - that I like. It's fun to get new clothes and shoes. And I love wrapping all my books so everything looks perfect, and getting all the new notebooks and pens, and cool erasers.

But I hate thinking about who I'm gonna sit near. I know that all the "in kids" are gonna stick together, and I never fit with them. I wish I could be part of that crowd and that everyone would fight to sit near me. But I'm just a loser and always have to go over to someone and ask, "Do you wanna sit next to me?" It makes me so nervous. What if they say no? I'll just die! I swear I will.

Last year I finally got up the nerve to ask Megan and she said, "I'm already sitting with Jessica. We made up last night." I was so embarrassed and didn't know what to say. Everyone else was already sitting with their friends and the only seat left was in the corner near Amy. She's such a nerd, and I got stuck near her - watching her pick her nose and scratch at her dandruff all the time, until finally Mrs. Taylor changed my seat three weeks later. 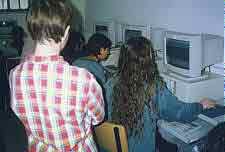 Yuck! I just know that if I don't ask someone, no one is ever gonna ask me either. What if I get stuck near Amy again? I'd gag if I had to watch her picking any more winners.

I wish I had a best friend. Then I wouldn't have to worry about this again every year. Like Angela and Katherine - they always sit together ever since first grade. They're so lucky, they never have to worry that no one likes them. I don't really have any good friends in school, but the first day is the worst! Maybe I have bad breath, or B.O. or something, and that's why no one wants to sit near me.

I wish they made us sit in alphabetical order. Then I'd get to sit near Brittany - she comes right after me. But she's so popular, she'd probably never want anything to do with me.

I hate school sometimes. I wish there was no such thing as an "In crowd" and that everyone could be friends just the same, and no one would feel so left out.

When I was little, I didn't mind so much, but now I just feel so ugly and stupid. I wish I had a best friend.

Read How I Hate The First Day Of School: A Therapist's Comments 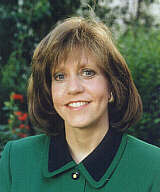 More in this category: « Preventing Teen Suicide I Have No Friends »
back to top